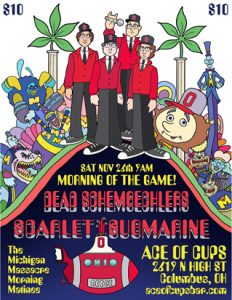 It’s been long rumored that LB is eyeball deep in the legendary Ohio State football-fueled punk rock band Dead Schembechlers. The group has made a career out of savagely attacking the Michigan Wolverines in favor of THE Ohio State Buckeyes. They’ve appeared on HBO, ESPN, ABC-TV and in newspapers around the world including The New York Times, Detroit Free Press, The Sydney Herald, Detroit News, Columbus Dispatch, The London Times, and USA Today.

The band has announced it’s first ever coloring book entitled “Scarlet Submarine.” It tells the story of a pigskin paradise called Buckeyeland overrun by Maize and Blue Weenies led by Coach Hairball. A creature called The O-Where Man escapes the catastrophe in the Scarlet Submarine and enlists the band to reclaim his homeland. The story was written and conceived by lead singer Bo Biafra with graphic blandishment by Alan MacBain. It is now available through the band’s website here.

The group has also announced its Hate Michigan Rally. It will be held in Columbus, OH Friday, November 25 at Ace of Cups, 2619 North High Street. Special guest will be Bava Choco. Show time will be 8pm. Further information is available at DeadSchembechlers.com and AceOfCups.com.

UPDATE: The Hate Michigan Rally is now completely SOLD OUT. The band has added an unprecedented second show. The Michigan Massacre Morning Matinee will star the band at 9AM Saturday November 26th. Tickets on sale here. 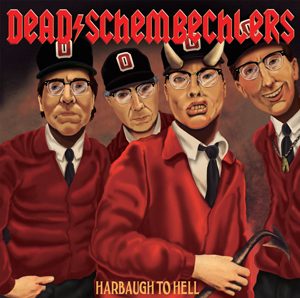 The legendary Dead Schembechlers, who this year celebrate their 25th anniversary of skewering Michigan Wolverine football in favor of their beloved Ohio State Buckeyes, have released their latest opus, “Harbaugh to Hell” for Halloween 2015.

Since the video launch, the song has exploded thoughout the The Rivalry. The video garnered over 10,000 YouTube views in its first 24-hours. The sporting world has been all over it including Detroit News, Dallas Morning News, CBS Detroit, ESPN Music, Ozone.net, Eleven Warriors, Cleveland Scene, Horror Society, Gregg Henson Sports, The Sports Bus, Pencilstorm, Pittsburgh Music Magazine, Pop Sound Off, Pure Rock News, Bahmagz, and others.

To find out more about their rock-crazed take on the biggest rivalry sports hit DeadSchembechlers.com. 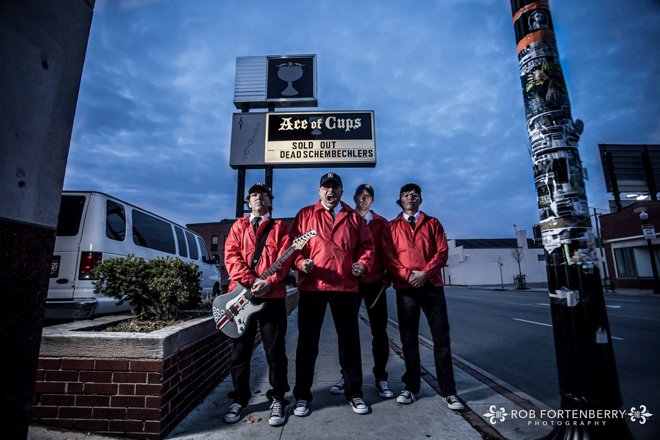 The group headlined their somewhat annual Hate Michigan Rally at Skully’s Music Diner on High Street in Columbus, OH on Friday November 26th, the night before the rivalry game between the two schools. A sellout crowd of 600+ insane Buckeyes turned out.

LB is also continuing writing the unauthorized autobiography of the band, Dead Schembechlers: The Rise, Fall & Redemption of the Best Damn Punk Band in the Land. It will delve into Bo Biafra’s life, the history of the group and the true story of The International Wolverine Conspiracy. It will be filled with sex, drugs, rock n roll, violence, insanity and pigskin.

Also, in case you missed Bo/Brutus and the band in HBO’s film “The Rivalry: Michigan versus Ohio State,” be sure to pick up a copy now on DVD.