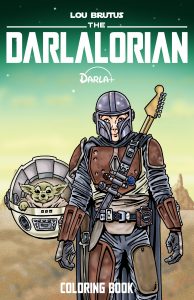 To get yours, just hit the links below. Click on each to download or print directly. There will be a new chapter each week with both an illustration page and a narrative page. They’ll available each week thereafter until the end of the story.

As you may have guessed, it’s a parody of the Disney+ hit “The Mandalorian” with artwork by Alan MacBain and script by LB. It tells the story of a mysterious creature known as The Puppy Child (Darla) and the intergalactic Rocker (Lou) who becomes her protector. Their misadventures unfold in a “season” of eight chapters with each “chapter” represented by a single coloring-book page. Watch for various actors and Rock stars in cameos.

Plus, you can win cool prizes by coloring the pages! Color and post the new page each week on your social media using the hashtag #TheDarlalorian. They’ll be judged in two divisions including Hand Colored and Computer Colored. Winners each week will receive a poster of the cover signed by LB and Darla, as well as other goodies.

Of course, this is not the first time that Lou, Darla, and Alan have teamed up for a coloring book. To celebrate the 50th anniversary of the film “Yellow Submarine” from The Beatles, they published another coloring book parody entitled “Yorkie Submarine.” Read about it and download it here.