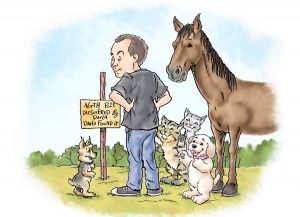 With the arrival of the holiday season, it’s time to unveil the artwork for this year’s Christmas card from Lou and Darla the Wonder Dog.

As 2020 has been pretty nasty, Lou thought it would be nice to use a card theme that drew off of some beloved childhood art. So he called up artist Alan MacBain and they dreamed up an image.

This year’s card is based on an original illustration by E.H. Shepard for A.A. Milne’s short story “Winnie the Pooh and the North Pole Expedition.” In our version, Darla and Lou are joined by Venus the Meowing Pussycat, Rosie the Pup, Moses the Gregarious Barn Cat, and Little Stevie the Pony. The inside of the card reworks text from the Pooh story.

PLEASE NOTE: Because of backups at the USPS, Lou had not yet received his cards from the printer as of Saturday December 19th. Please be patient if you’ve written in. Thanks.