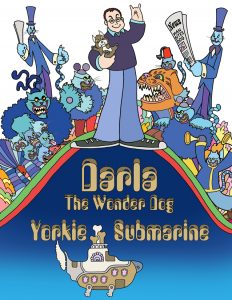 Time to save Pupperland with the release of “Yorkie Submarine.” It’s a downloadable coloring book that parodies “Yellow Submarine,” the landmark animated classic from The Beatles, celebrating it’s 50th anniversary this week. Download it for free here.

The story stars Lou’s beloved yorkiepoo Darla the Wonder Dog and tells the tale of the “Idyllic Doggy Destination” of Pupperland being invaded by evil Blue Kitties. Darla escapes in the Yorkie Submarine and brings back LB to free Sgt. Pupper’s Hungry Hounds Club Band. First they travel exotic undersea locales like The Sea of Digging Holes and The Sea of Dogs Can’t See Green before batting canine-hating creatures like Crazy Cat Nippers, Dastardly Dog Catchers and The Fearsome Flying Vacuum.

Brutus wrote “Yorkie Submarine” with images provided by his longtime graphic artist Alan MacBain. Alan has provided art for several Brutus-related projects thru the years as well as other music-themed work for The B-52s and Dead Schembechlers among others.

Of the coloring book Brutus says, “I couldn’t help but notice that everyone on Earth has gone insane and want to beat each other into a fruit-juicy pulp. I thought, ‘What can I do to distract them for a few moments?’ Then I realized what the world needed was a totally whacked-out 50thanniversary parody of a trippy Beatles cartoon-movie starring my dog where she and I battle acid-casualty cats and giant, blood sucking ticks. Seriously, was there ever a better time for something so weird and silly? Hopefully, it will give people who download and color it a pleasant respite before they go back to yelling at one another. At least the price is right!”

Brutus continued, “The coloring book is free, but I encourage folks who enjoy it to donate their time and money directly to their local animal shelters and rescues. Our animal friends are one of the great blessings in life and we must be better stewards of this awesome planet we live on. I realize there are other problems that require attention, but with this particular project I thought it apropos to help our fellow creatures. Support the animal shelters and rescues where you live or consider adopting a pet of your own, even if it’s a wicked Blue Kitty, so you can join Darla and I on the Yorkie Submarine!”

FREE DOWNLOAD: Get the coloring book here. Then just download the PDF file and print it out! Be sure to share your colored versions (hand colored or computer coloring) with us on social media using the hashtag #YorkieSubmarine.

Radio trade All Access covers the story here. Inside Radio with a mention here. Read the full press release here.