On April 14, 2020 Rare Bird Books of Los Angeles publishes Lou’s long awaited memoir SONIC WARRIOR: My Life As A Rock and Roll Reprobate (Tales of Sex, Drugs and Vomiting at Inopportune Moments).  The book is a collection of insane-but-true stories from his decades in the music biz. It includes chapters like “The Time Our Tour Bus Ran Over A Guy on the NJ Turnpike,” “The Time Snoop Dogg Got Me So High I Drooled in My Own Lap” and “The Time I Went to the Arctic and Got in A Mosh Pit with A Bunch of Kids in Polar Bear Fur While Metallica Sang About Sodomizing A Goat.” A full list of chapter titles is below. The Foreword is written by his friend Corey Taylor of Slipknot and Stone Sour. Plus, there will be an original illustration for each chapter by Lou’s longtime partner-in-artistic-crime Alan MacBain.

Check out Lou unboxing the first copies of the book as well as give you your initial look at the illustrations here. See LB and Darla the Wonder Dog signing copies here.

Neal Middleton of Royal Bliss raves about the book here.

Podcast Roundup: Brutus has recently spoken at length about the book on a number of podcasts. Listen here for him on the Welcome to Cooperville podcast. Catch Lou guesting on The Rock Fest Podcast here. He also spoke to The Stylecast with Wes Styles here. LB joined Brando on Appetite for Distortion here. You can hear him speak about the KISS-related topics in the book with Three Sides of the Coin here. Nerdy music talk with The Revelator Show is here. And hear Lou on The Midwest Metal Show here. The Spirit of Radio Podcast features Lou here. 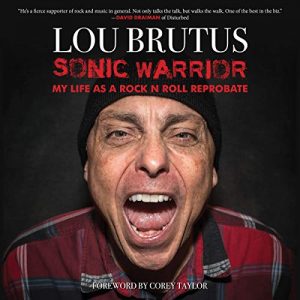