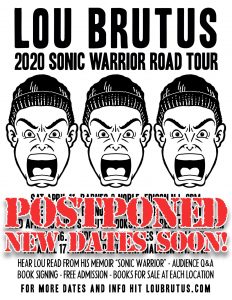 Lou Brutus had planned hitting the road to support his new memoir SONIC WARRIOR: My Life As A Rock N Roll Reprobate (Tales of Sex, Drugs, and Vomiting At Inopportune Moments). We are sorry to say that the initial dates have been postponed due to the ongoing health concerns. However, we assure you he will be joining you around the country as soon as the coast is clear!

The Sonic Warrior Road Tour 2020 had announced its initial dates. When the events eventually happen, Lou will give an overview of the book, read selections from requested chapters, do an audience Q&A, and sign copies. You can also expect him to have limited edition memorabilia to celebrate the events. There will be books for sale at each one of these stops.

Admission will be FREE!

On the bright side, there will be many more appearances announced in the coming months. Lou also intends on doing signings at Rock Fest in Cadott, WI this July. Fingers crossed that all is well by then. There is also a rumor that Darla the Wonder Dog will be making select appearances at some dates!