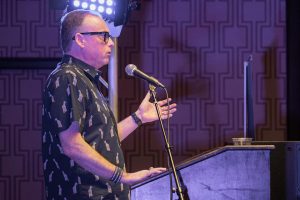 What happens in Vegas happens at #Happens.

#Happens is a yearly gathering of music and media in Las Vegas that brings together artists, tastemakers, influencers, brands, and others that concentrates on the world of new Rock music. It occurred this year in late-February at the Golden Nugget.

Among the presentations and band performances, Brutus gave the first reading from his forthcoming memoir SONIC WARRIOR: My Life As A Rock N Roll Reprobate. Along with two-chapter excerpts, he gave an overview of the project and also fielded questions from the audience.

It was not a public event. The presentations and showcases were only open to official attendees. However, it included radio and record friends from around the USA. We will shortly post dates for Lou’s initial book tour dates.

The entire schedule of events from #Happens can be seen here.