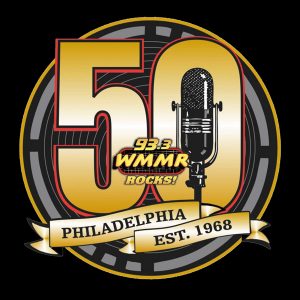 Tonight I’ll be attending the 93.3 WMMR Philadelphia 50th anniversary staff reunion. I can safely say that my life would be nowhere without that radio station. My entire career has been built upon a few lucky chances connected to WMMR, a radio station I grew up on in Central New Jersey.

As a teen, I worked theatre sound and lighting at Six Flags Great Adventure in Jackson, NJ. It was a fun job and one of the shows we ran was a multi-media extravaganza called “The Rock N Roll Time Machine.” As my sound booth was in the audience, folks would often ask questions after the show. One day, a gentleman began enquiring about the rights to the clips in the program. When I mentioned he sounded like he was in the music biz, he introduced himself as Rod Carson from WMMR. I swear to God that at that moment a voice in my head said, “Opportunity is knocking. Open the door.” I told Rod I listened every day, that I was on my college station, and that I’d love to get my foot in the door. He graciously gave me his card, writing the name Bev Rohan on it. He said to call her and they’d see about an internship. I got it.

The internship was to be three months but they liked me and I interned for over a year before corporate said, “You can’t have him work for free anymore!” I left for several months but after a Grateful Dead show at the Spectrum one night, I stopped by to visit Pierre Robert who was then doing the overnight shift. John DeBella came in to set up his morning show and while he was prepping the phone rang. It was his producer calling in sick. John slammed the phone down and said to Pierre, “I gotta get a real producer for this show!” I jumped up and said, “Hi, John! I’m your new producer!” He laughed and said, “You got balls, kid. Go sleep on the couch and I’ll take you to breakfast when I get off the air.” We ate, talked, and a week later I quit college to move to Philly to start the job.

A few months into the gig, the program director gave me the Saturday night graveyard shift. I wouldn’t be on the air, I’d just be running pre-recorded shows. However, the extra money and responsibility were very welcome. Several weeks later on one of those shifts, the hotline rang. It was Larry Richman who was the DJ due to be on the air at 9am when the recorded shows ended. He said he was sick and likely wouldn’t make it in. I panicked. What would I do? I called the program director George Harris but he was away for the weekend. I then called APD Joe Bonadonna. “Joe, it’s me! Larry’s not coming in and we’re going back live soon. What am I supposed to do?!?!?!?” He very calmly said, “Sounds like you’re getting your big break. I’d tape it if I were you.” Then he hung up. After fighting back the urge to pee in my pants, I started to get organized. When the station went back live at 9am the first song was Journey’s “Don’t Stop Believing.” I taped the couple of hours I did before Larry limped in and played it for George the next day. He said, “You sound really good. How would you like some regular weekend shifts?”

And that’s how my career began. Instead of working at small market stations, I started at one of the greatest broadcast outlets in history. I was a teenager rubbing elbows with Pink Floyd, Frank Zappa, and the members of Monty Python’s Flying Circus. All because of blind fucking luck.

I don’t know who my guardian angel is, but I sure do appreciate them.

And I appreciate my years at WMMR. Whether as an intern, a morning show producer, a weekender, or when I returned in the 90’s as a full-time DJ. It’s an amazing place with amazing people. I will be forever indebted to them for taking my under their wing and teaching me the craft. I’m looking forward to seeing everyone tonight.