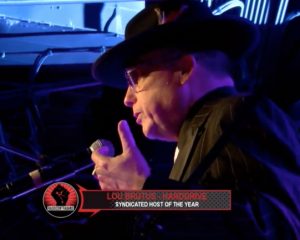 Thanks to the voters and members of Radio Contraband for naming Lou Brutus as the Best Nationally Syndicated DJ in America at the Rock Radio Awards in Las Vegas NV.

It was the fifth year for the awards, held this year at Club Vinyl inside the Hard Rock Hotel and Casino, and the fourth year for the Best Nationally Syndicated DJ category. LB has won the award every time it’s been given out. He is now a Grand Champion and is no longer eligible to win the honor.

Chris and Matt Brooks of Like A Storm announced the category and brought Lou, who was also hosting the awards this year, to the stage. He thanked many of the DJs who inspired him including Scott Muni, Harry Harrison, Ron Lundy, Carol Miller, and Vin Scelsa. Lou was also sure to mention Darla the Wonder Dog.

The show opened with Brutus backed by the members of Shallow Side singing an LB original written just for the night “This Ain’t the Grammys (We Don’t Have to Kiss Pop Music’s Ass Tonight.)” Rachel Lorin also performed during the show.

If you missed the web broadcast you can see it here. 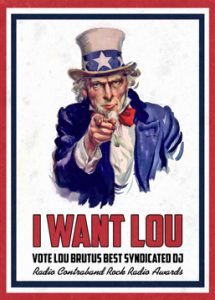 For the fourth straight year, Lou has been nominated as “Best Nationally Syndicated DJ” in the prestigious Rock Radio Awards from Radio Contraband. Media and music industry members can vote here.

Brutus said, “It is my great honor to again be nominated as ‘Best Nationally Syndicated DJ of the Year’ in the RadioContraband Rock Radio Awards. As the nomination coincides with the twentieth anniversary of my show, it would be marvelous to win. Also, the other nominees all talk shit about you behind your back. No, really! Don’t reward the bastards for it!”

The awards will be given away during Rock Radio Convention 2017 at the Hard Rock Hotel and Casino in Las Vegas, NV. LB will return as host of the event. Find out more about the shindig here. 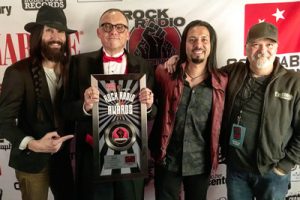 Lou Brutus returned as host of The Rock Radio Awards in Las Vegas, NV during the Radio Contraband Rock Radio Convention back on February 12, 2016.

The awards ceremony was held for the very first time in Vinyl at the Hard Rock Hotel and Casino.

LB was nominated as Best Nationally Syndicated Host of the Year. It was the third year running for this award and Lou has not won it on each occassion.

The ceremony began with Houston, TX based band Hounds of Jezebel back Brutus on a song he wrote for the occassion, dedicated to all of the nomineeds, entitled “If I Don’t Win My Award Tonight (You Can All Go F*ck Yourselves).” Hilarity ensured. You can see video of the performance here.

After being handed the award by his friend Jesse James Dupree of Jackyl and Full Throttle Saloon Lou said, The only thing that has ever truly mattered to me in life is music. Without music, life itself is impossible. People come and go, but a great song remains loyal to you forever. I have killed for music. I am willing to kill for it again.”

Read about it with Voume 11 Music, Onstage Review, Pop Sound Off, All Access or I’m Music Magazine. 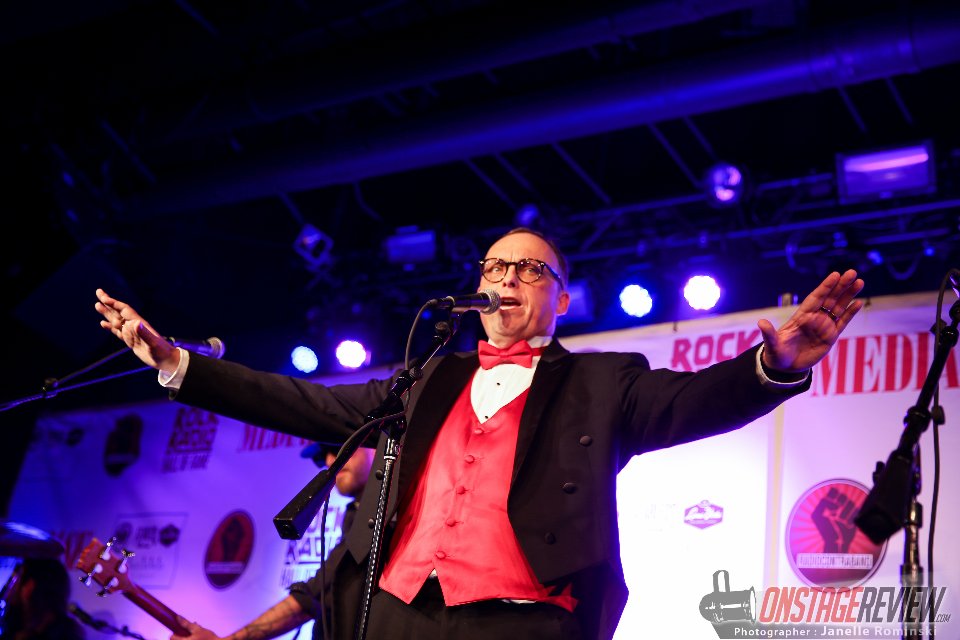 Lou was again Master of Cermonies for the ceremony, held at the House of Blues at Mandalay Bay. He opened the show by performing a blues number, backed on guitar by Dameon Aranda of Aranda, entitled “The Radio Contraband Las Vegas Blues,” a somewhat filthy look at the current state of the radio and recording industries.

Brutus thanked his listeners, radio brethren and Darla the Wonder Dog for the support in besting the other nominees which included Nikki Sixx, Full Metal Jackie, The Chop Shop and Skratch N’ Sniff.

THE MYSTERY GIRL: When @OfficialCheapTrick launche