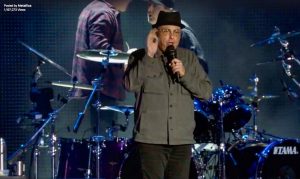 The U.S. leg of Metallica’s WorldWired Tour began May 10th at Raven’s Stadium in Baltimore MD. However, the candle was lit by Lou Brutus the night before as he hosted a rehearsal special entitled “Metallica: Now That We’re Live.”

Millions watched around the world on Facebook Live while three hundred MetClub members viewed in person from the pit as LB joined Metallica onstage. The group slammed thru four songs including “Atlas, Rise,” “For Whom the Bell Tolls,” “Now That We’re Dead” and “Battery.” The performances were intro’d by Lou who returned to wrap up the show, only to be egged on by Lars Ulrich to sing a bit of the Anti Nowhere League classic famously covered by Metallica, “So What.” There was also a lengthy interview with Lars and Brutus that aired after the music.

Following the broadcast Lou said, “I hope that every girl who ever dumped me saw me onstage tonight with Metallica…BUT I’M NOT BITTER!!!”

If you missed the original event you can catch it on YouTube here. Check out another interview with Lars and LB here. Read the story on Blabbermouth here.