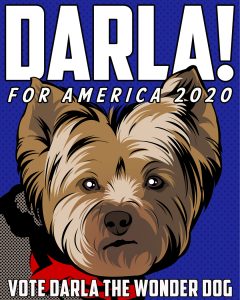 Darla the Wonder Dog is running for office… although we don’t know exactly WHAT office that might be.

She recently informed LB that “I think it’s time for ME to be in charge” because “How much worse could I make it?” With that in mind, she has forced Lou into the job of campaign manager.

There is also Vote Darla 2020 swag in production including stickers, pins, and lawn signs. These will be available for her supporters through social media contesting on Darla’s accounts. Some of these items will be autographed the candidate herself!

Darla is confident in regard to the approaching campaign stating, “I will rule with an iron paw!” It would seem that Lou is less-than-thrilled, muttering under his breath, “I’m getting a bad feeling about this.”