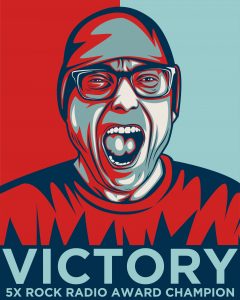 The Rock Radio Awards were held at the Hard Rock Cafe in Las Vegas on Friday February 23rd, 2018 and for the fifth-straight time Lou Brutus was the winner as Best Nationally Syndicated DJ in America.

Upon getting news of the award he posted, “I’ve just learned I was the winner tonight as Best Nationally Syndicated Host for the Rock Radio Awards at the Hard Rock Cafe in Las Vegas. I’m really shocked to have won again and am very grateful to those who voted for me.”

Originally, LB was once-again slated to host the awards. However, his travel schedule was incredibly intense over the last month and he felt he would do a sub-standard job as host so bowed out. “I really wanted to be there but I wouldn’t have landed in Las Vegas till an hour or so before the awards and I didn’t want to disappoint everyone with a poor performance. I hope I’ll be invited back for a future show,” he said.

Not expecting to win again and with no one volunteering to accept for him, Brutus is thankful to his friend Ski from WJJO in Madison, Wisconsin for accepting on his behalf. He hadn’t prepared a speech so she read the closing quote from Hunter S. Thompson’s “Fear and Loathing in Las Vegas.”

Brutus continues as the only winner as nationally syndicated DJ in the history of the awards. He sends his gratitude to everyone from The Contraband Company who organize the Rock Radio Awards especially Steven Walker and Beatrix Danko.