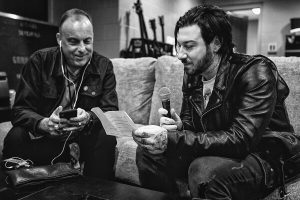 The brave new year of 2018 is already a busy time for your friend and humble narrator.

Lou was in New York City early in January for a marathon four-hour interview session with the legendary Stevie Nicks of Fleetwood Mac. The audio will be heard on upcoming SiriusXM project featuring Fleetwood Mac.

On February 3rd Brutus traveled to Evanston, IN for The Stage World Tour. While there he spoke with Zacky Vengeance of Avenged Sevenfold, Benjamin Burnley of Breaking Benjamin and Matt Tuck of Bullet for My Valentine.  FYI the guys in A&X confirmed a 2018 summer tour of the United States to LB.

From there it was down to Nashville, TN to spend the day interviewing Lynyrd Skynyrd for an upcoming project on SiriusXM.

Then February 15 Lou flies into Milwaukee WI for a three-gig trip with Starset. From there he’ll accompany them on the bus to shows in Rockford, IL and Fargo, ND.

Sadly, because of his Rock N Roll schedule, LB has had to withdraw as host of the Rock Radio Awards at the Hard Rock Cafe in Las Vegas, NV.

Be sure to come out, say hello, and support live Rock!