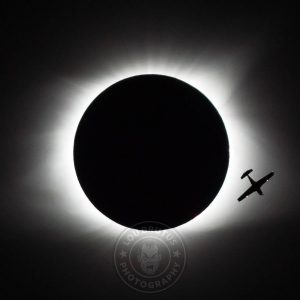 The Great American Eclipse passed from coast to coast on Monday August 21st and photos taken in the Path of Totality by LB have gone viral worldwide.

Braving what were expected to be dicey weather conditions, he flew to Charleston, SC and then traveled to Saluda, SC on the morning of the eclipse. Setting up in a local cemetery, Lou was blessed with clear blue skies by the height of the event. While he would have been happy with normal eclipse pictures, LB captured something extraordinary. During totality, a small plane photobombed the sun and moon, actually eclipsing the eclipse. Out of the millions of pictures taken during the eclipse, a rare few featuring aircraft, this is the only photo series to occur during totality.

Soon after the eclipse, LB’s photos were picked up by both Getty Images and the Associated Press. News services and publications around the world then began featuring the shots after that including National Geographic, BBC Science Focus, Zaikei News of Japan, AOL, Global Times of Beijing, Huffington Post Korea, aeroTelegraph of Germany, iHeart Media and many others. Please feel free to make us aware of any other usage.