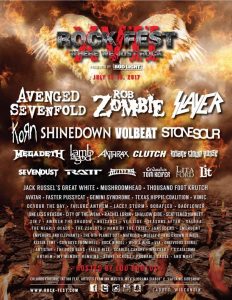 It’s Rock Fest Week as Lou returns for the fourth straight year as the official host of Rock Fest in Cadott, WI July 13, 14 and 15.

Brutus will host onstage, interview the artists on camera backstage, and also shoot down the photo pit. In addition, a special Meet & Greet with him will happen, and official Lou Brutus merchandise will be available.

For ticket information and the full line up hit the official Rock Fest site.