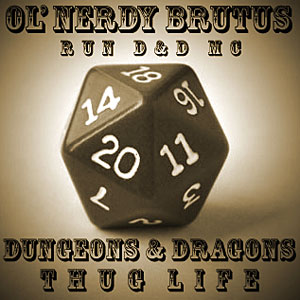 For a limited time, we’ve posted a demo of a new tune dedicated to all of the Dungeons & Dragons playing nerds around the world. Entitled Dungeons & Dragons Thug Life it graphically explores the explosive meeting between the worlds of gansta MCs and role playing geeks. Recorded under the nom de plume Ol’ Nerdy Brutus the Run D&D MC it was recorded with master hip hop producer Scotty Beam. This is only a demo version of the full tune that will be released in early 2011! Hit myspace.com/loubrutus