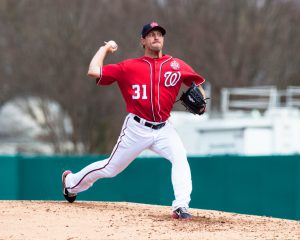 Lou will be back for his tenth season as an on field Major League Baseball photographer in 2017 for SiriusXM Sports.

HIs first game for the year was the preseason Naval Academy Baseball Classic in Annapolis, MD. The contest pitted the Washington Nationals against the Boston Red Sox on Terwilliger Brothers Field at Max Bishop Stadium. The tiny crowd was made up entirely of midshipmen from the academy who won tickets in a lottery. During the game, Brutus was honored to meet The Honorable Sean J. Stackley, Acting Secretary of the Navy, who was kind enough to slip LB one of his challenge coins.

LB has trips on the books to shoot baseball games in Cincinnati, Cleveland, Chicago, Philadelphia, Washington DC, Baltimore. and both the Yankees and Mets in New York City.