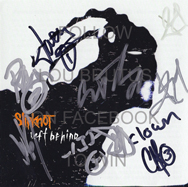 In honor of Slipknot regrouping for live shows next Summer, Lou Brutus dipped into his private collection of rock goodies for some holiday treats.

One lucky fan of Lou’s Facebook page and another who follows him on Twitter found themselves with a rare Slipknot CD single that has been autographed by all nine band members!

“I miss Paul, I’m glad the guys are getting together to play and I’ve got a treasure trove of Slipknot stuff that I knew the other maggots wouldn’t mind sharing in,” said Brutus. “It just seemed like a good thing for the holidays.”

Amber Ray Pedersen of Iowa and Ken Wasson of Wisconsin scored the discs. More goodies are on the way including items from Stone Sour and Avenged Sevenfold. To win you must be a fan of Lou’s Facebook page here and/or follow Lou here on Twitter. Merry Christmas, Happy New Year and Good Luck!